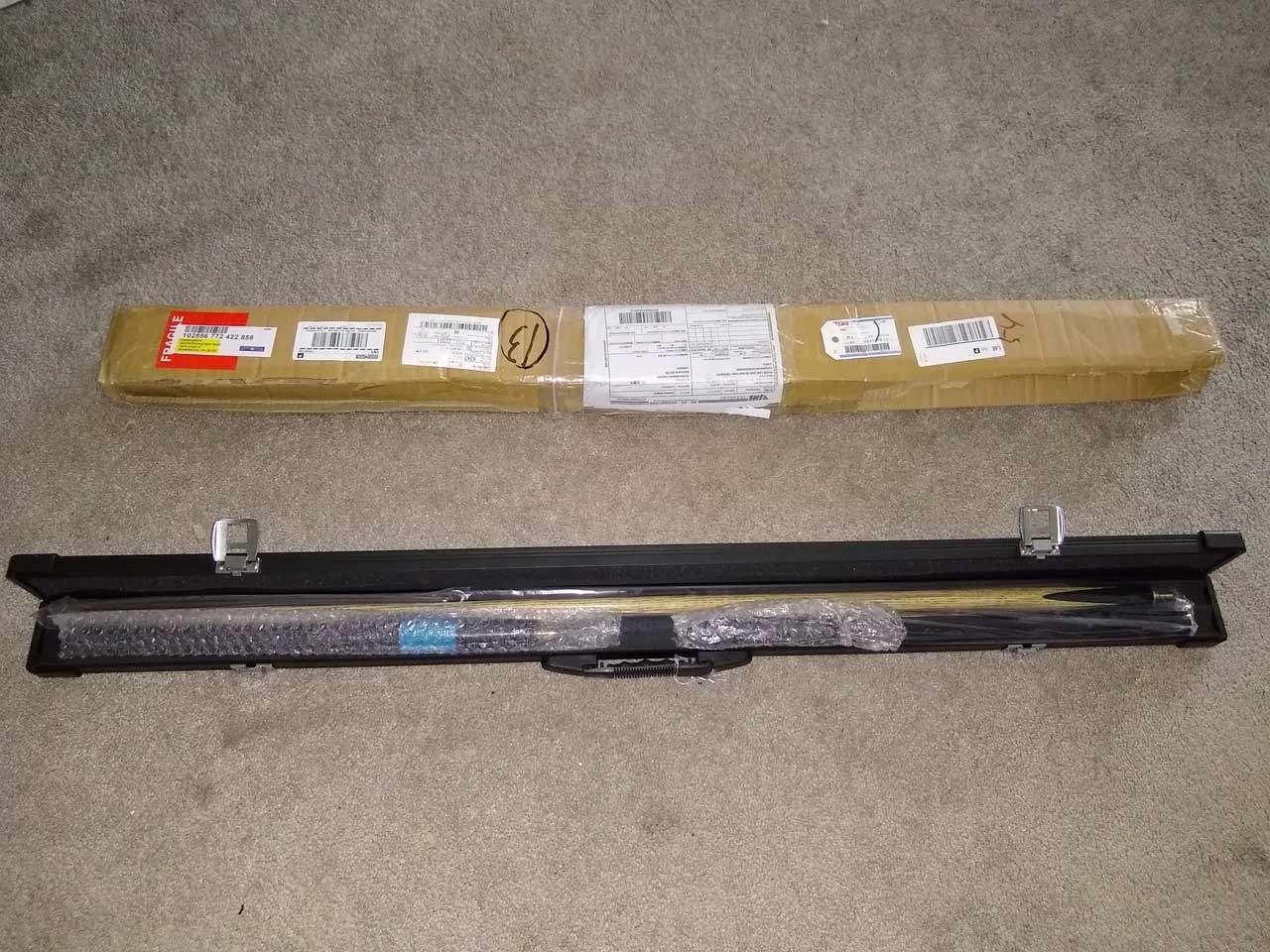 So, after much deliberation I decided to invest in a new cue. My current Jian Ying cue has been instrumental in helping my game over the last year, but at 57” in length, certain shots have been limited due to the short cue length, and with me being 6’3” tall my natural right hand placement for perfect timing has always wanted to be a little further back than was possible. I also wanted to add a little weight, as my previous cue just felt a little light on certain shots (18oz).

Enter the Woods #8517 3/4 ash cue. I have followed this brand for a while and have seen lots of positive reviews for their cues. They have been established for over 30 years, and I liked how their website is arranged, in that every cue is displayed with its exact specifications alongside. So the cue you see is exactly what you get, instead of just being a generic set of specifications, where what you receive is a bit of a lottery. So the cue pictured on the website is the ACTUAL cue that you receive, and once you purchase that model number (in this case #8517) that cue is removed from the website. So it’s like buying a custom cue without the huge price tag associated with it.

I ordered the cue on December 16th 2019 and it arrived on Dec 24th 2019 (Figure 1). In total, with the case, mini butt, telescopic extension and personalised disc I paid a total of $120USD (approximately $160CAD). On the website it mentions to allow an extra 2-5 business days for adding a personalised disc (described below), and with it being Christmas season I really wasn’t expecting to receive this until the new year.

When ordering this cue I had the choice of 7 cases to choose from: 2 Aluminium cases, and 5 vinyl types of varying patterns – I opted for the Black Aluminium case. The case itself seems quite well made, with black plastic end caps, and at only 18oz, actually weighs less than the cue itself. The 2 latches are wider than expected which is hopefully a further sign of their sturdiness, however for a case of this length I would have preferred an extra latch in the middle as well. The latches do come with the unexpected added benefit of being lockable. The keys for these locks were attached to the handle itself, which you can make out in Figure 1. The “slimline” style handle looks slick, but is a little restrictive for carrying if you have larger hands. But all in all, it’s a good case for the money.

I opted for a custom disc (Figure 2) in the butt where I was able to have my last name printed in place of the standard “since 1985”. It was only about $10 CAD extra for this personalised disc, and I thought this was a really nice option to add some extra customisation. The extra delivery time (2-5 days) needed was worth it in my opinion.

On the website there are enough pictures provided to allow you to see the actual grain of the cue from all sides. Another reason I chose this cue, was due to the close grouping of the grains and multiple chevrons along the shaft which very clearly contrasted the ash wood itself. (Figure 3). It should be noted that each cue has different grain patterns, so make sure to check the website images closely to get the exact style you want.

The finish is light, not heavily lacquered and in my opinion playable right away. My previous cue needed some sanding due to a heavy lacquer on the shaft which made the cue feel sticky right away – but not so with the Woods cue.

For the butt end of the cue, there are many different splice combinations available on the website, from simple (no splice) to quite exquisite examples too.

For me I liked the relatively simple look of the ebony and maple contrast but it really is just personal preference. I chose an ebony butt with maple splices. Again, the finish is light, smooth and not overly lacquered. The end incorporates the extension joint, and the cue came with both a mini butt and telescopic extension. (Figure 4)

The splices in the butt and the grain chevrons match up perfectly, which really helps with the alignment when feathering – hopefully this will not change over time as the cue is screwed together and taken apart multiple times.

For the main joint, the screw threads are quite fine, and there is a very smooth feeling when attaching the butt to the main shaft. With my previous cue the threads were a little coarser resulting in a looser feeling during tightening, although fine once fully tight.

Initially the standard tip felt a little soft for my liking, but after a few frames it seems to have bedded in nicely, and most shots are consistent in feel and feedback. I found that at first, with extreme side or more powerful shots I could really feel the dampening from the softer tip and this was not my preference, however, unlike my previous cue which came with a very hard tip which I had to change straight away, this one is more playable from the outset.

I have now played around 12 hours with the cue and the tip has hardened up; the sponginess I initially felt has disappeared and it is exactly how I prefer, which is about a medium level hardness, so I will not be changing the tip anytime soon after all. I did also email Woods to ask if they could confirm the tip type and spec as I will probably order some more as backups.

The tip itself measures approximately 9.3mm diameter which was a little smaller than I would have preferred, but as I have played with it and got more used to it I’m finding it not to be an issue. I personally wouldn’t want to go any smaller though.

After around 12 hours of playing so far, I am pleasantly surprised by just how quickly I seem to have got used to this cue, although playing with my previous cue for a year and so being able to hone in on what exact specifications would work for me has helped. I would recommend any player to seriously consider the Woods brand of cues especially if upgrading from a beginner or novice cue. The price was great, their website was full of information, their customer service has been very responsive and the option to personalize the disc with my name was an unexpected bonus!

I hope this review has been of some use to those also considering a change to their cues. Again, deciding on your specs in advance is a great help when ordering online, and trying it for a few hours before forming an opinion is key.

Please let me know if you have any questions and I’ll do my best to answer them. Thanks for reading!