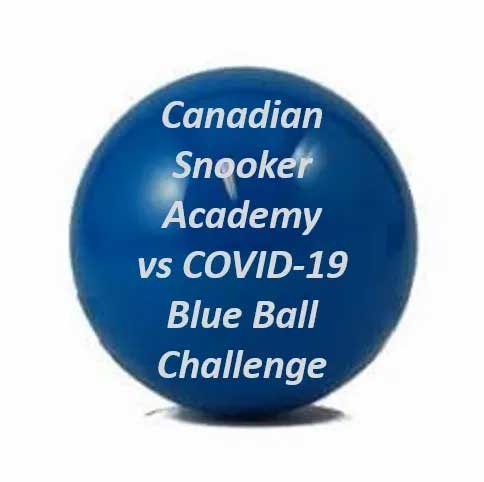 With the threat of COVID19 all around us, and most of us suffering Snooker withdrawals as we stay at home during this time, Jason Francis and the Rokit World Seniors Snooker Tour Players came up with a novel challenge to help raise money for the National Health Service in the UK, and  Health Safety Executive in Ireland, to support the thousands of front-line workers selflessly putting themselves on the line day in day out to combat this virus.  Players fortunate enough to have a Snooker table in their homes were invited to try to pot as many blue balls off the spot out of ten, as possible.

With the blue ball on its spot, and the cue ball anywhere in the D, challengers live streamed their efforts which were broadcast on the World Seniors Tour Facebook page.  Gary Filtness kicked off the challenge with a fantastic 10 out of 10 clearance and really set the bar high.  Subsequent efforts have included many top players including Joe Perry and Stuart Bingham, who scored 8 and 9 out of 10 respectively.  Stuart entertained by showing us his amazing snooker room, complete with the actual Star World Championship table on which he won the World Championship in 2015!

Inspired by the World Seniors Tour Players in England, Canadian Snooker Academy decided to set the challenge to local players, with the hope of raising money in support of the Sunnybrook Health Sciences Foundation which was the first Hospital in Canada to see a case of the COVID 19 virus.  As of writing we have had 3 attempts from David Puddy, Oma Miesta and Indi Lotey.  David started us off on Monday with 3 out of 10 on his 100+ year old Burrough & Watts antique table.

Oma continued the charge, and after a few technical difficulties with the stream, knocked in a highly respectable 6 out of 10.

Wednesday was Indi Lotey, out of Kingston, ON.  Bragging rights go to him for knocking in 7 out of 10, and catapulting himself to the top of the Canadian Leaderboard.

So far we have raised $377 out of our $500 target, in just 3 days.  You can view the attempts on our facebook page, along with links to some of the UK efforts. If you would like to support the Sunnybrook Health Sciences Foundation, all donations are very gratefully received!  Link to the donation page here

We are still hoping for a couple more challengers to try their luck, and maybe achieve the elusive 10 out of 10.   Who knows, we may even have a Canada vs UK “Blue-Off”…….

If you fancy a go, or know anyone with a table at home who would like to support a great cause by taking part in the Blue Ball challenge, please get in touch with Canadian Snooker Academy on their facebook page or via email at info@canadiansnookeracademy.com